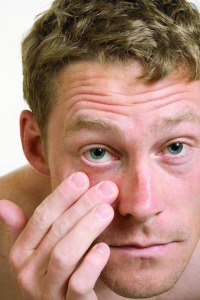 The sun is shining on game day. You assume you’re prepared for the weather by wearing your contact lenses and sunglasses. But when you miss that ball because of the glare from the sun, that preparation seems useless. If you’re wondering what the problem could possibly be, take a look in the mirror: your eye color could be the source of your quandry.

You’ve probably never thought about how eye color can affect your athletic performance. Players with light colored eyes have less pigment in the macula of their eye. Because this pigment serves as “internal sunglasses” for the eyes, less pigment means your eyes have less protection from the sun and the resulting glare.

The New York Times and the Elias Sports Bureau researched this topic and found that baseball players who “began their careers since 1970 and had at least 500 day-game plate appearances, 12 of the 19 largest career drops between night- and day-game batting averages belong to light-eyed players.”
Baltimore Orioles Manager Buck Showalter told the New York Times in an interview that whenever he is out scouting, he always looks at the prospects’ eyes. He said that a scout who doesn’t look at a players’ eyes isn’t a very good scout, as it could impact the entire roster.
As important as sunglasses and protective contact lenses are, there are more organic ways to help protect your eyes from the sun and glare.

Eating dark, leafy vegetables like kale or spinach, which are filled with nutrients called carotenoids, can “build up” the macular pigment in your eyes. However, it’s difficult to implement enough of these foods in the average diet; supplementing with dietary zeaxanthin and lutein can make an incredible difference.

Instead of taking a risk, which could result in sitting on the bench, take every precaution you can. Protect your eyes. Go the extra mile by taking supplements like Vizual Edge Chewable and wearing eye-protection.